Jinko Gotoh is an Oscar-nominated producer and consultant for the animation industry. Her strengths and passion include the discovering and nurturing of diversified and creative talent, and charting new technologies and creative processes.

Jinko is currently producing her second animated feature for Netflix with Mark Osborne directing. Her other producing screen credits include: 2020 BAFTA winner and Oscar-nominated Klaus, The Lego Movie 2: The Second Part, The Little Prince, Oscar-nominated The Illusionist, 9, and Oscar-winning Finding Nemo.

Jinko started her feature animation career as the CGI producer on Space Jam. Jinko then became the Director of Digital Production at Walt Disney Feature Animation, where she helped build The Secret Lab.

Jinko is devoted to advance women and all under-represented people in the industry. She serves as vice president for Women in Animation. She is a member of the Academy of Motion Pictures and Sciences representing diversity and inclusion on various committees. She also co-chairs the PGA Animation and VFX Committee. Beyond that, she is the co-president for Symphonic Jazz Orchestra, which provides K-4 music education to underserved neighborhoods.

She holds a Bachelor of Science in Applied Math and MFA in Film from Columbia University.

Jinko is also a published poet and the happy rescuer of many, many dogs.

Was there a specific faculty member or peer who especially inspired you while at the School of the Arts? If so, who and how?

Michael Hausman taught the producing class. On the first day of class, he said, if you show up you will pass the course. If you miss three of more classes, you will fail... At the end of the semester he gave out couple of honors. And our reward was to PA on his Ragtime set. However we knew earlier that wasn't the way he got started in the business. So when I met a set PA, who had been doing this job for almost 10 years, I knew I had to find another way.

How did attending the School of the Arts impact your work and career as an artist?

We were taught not just the craft, but more importantly how to think by dissecting and criticizing great films. 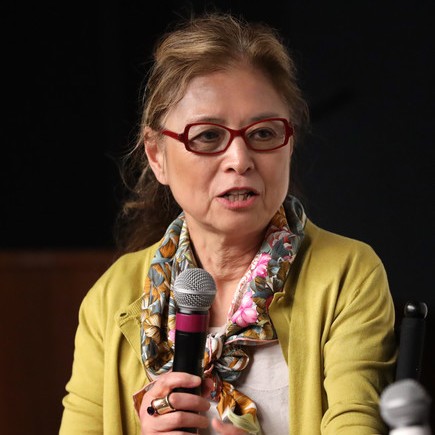